Why there’s a future for sliding 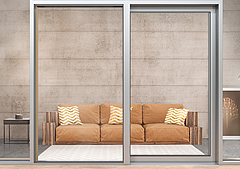 With intensive research and development, Roto wants to take account of future (product) requirements in particular. Successful examples of this are the “Patio Alversa” and “Patio Inowa” hardware product ranges (photo) in the Sliding portfolio. One thing they both have in common is that the operating logic can be adapted to the familiar sequences learned from Tilt&Turn windows.

Leinfelden-Echterdingen - Can an opening type that is in principle 2000 years old be brought to the forefront (again) when it concerns the window or windows of the future? It can indeed. This is because it has the potential required to meet the dramatically changed general conditions and market requirements of “tomorrow”. Innovative technology is, however, “just” a means to an end and not he driving force here. At least that’s how Roto sees things, predicting a “new career” for sliding systems. On the part of the hardware producer, Jens Busse explains the reasons for this in a contribution to the discussion on the occasion of “Fensterbau Frontale”. The Director of Customers and Markets Central and Eastern Europe (MOE) from the Window and Door Technology division is counting on the Sliding segment gradually increasing its current 20% share of the global hardware market.

As archaeological findings at Pompeii, Italy, proved, the Romans were equipping their homes with sliding elements as far back as the 1st century AD. Around 2000 years later, they experienced boom phases – albeit relatively short ones – during the Bauhaus movement or in the bungalows of the 1970s, for example. Busse also mentions the legendary “VW Bulli” to illustrate the system that people are familiar with. The next period of success may now be on the horizon; this time, it might last.

As is already the case with energy-saving windows and security windows, it is mainly general environmental influences that initiated or at least boosted the surge in demand. This includes the housing situation, which is continuing to worsen especially in urban areas. The Roto Director explains: “In many countries, the growing demand for housing is coming up against a limited number of available properties. This, in turn, leads to often extreme price rises. Sliding elements often provide a solution in two respects here. On the one hand, they ensure that scarce space resources are used efficiently as, in contrast to Turn-Only sashes, for example, they require no space for turning. On the other hand, every square metre saved through the use of sliding systems noticeably reduces the financial burden on investors and residents. We currently have to assume that each square metre of a new building costs between €2000 and €10,000 depending on location and fittings.”

What matters is therefore affordable and high-quality window solutions. These are made possible by intelligent and efficient manufacturing technologies, like the ones developed by Roto for the “Patio Alversa” and “Patio Inowa” hardware product ranges. These enable sliding elements to be manufactured in large quantities on the predominantly automated production lines of window manufacturers. This creates the basis for continuous market coverage at convincing prices.

Busse refers to another crucial factor in the shape of climate change and the resulting increasingly frequent occurrence of extreme weather situations. His analysis begins with a current reference: “Storm ‘Sabine’ and the damage caused by it are still fresh in our minds. All experts agree that these types of events will increase in number and intensity around the world in future. For window designs and their components, this means that they must be able to withstand enormous forces caused by gale-force winds and storms, among others. Needless to say, the challenge of ensuring sealing and stability in the long term in such conditions also applies to sliding solutions.”In parts of the USA and Canada, windows with the status “hurricane proof” are already mandatory. Busse highlights that the driving forces behind this technical advance to comply with the American certification “impact resistant” were once again external influences, specifically climate change and the resulting government standards and specifications. In a similar way, intensive research and development at Roto is focusing on sealing in sliding systems. Impartial awards for “Patio Inowa”, specifically in the USA, have confirmed the high performance level in this field.

And what else is putting sliding systems on the road to success? “They are now suitable for all application ranges and also fulfil all relevant trends,” states Busse. By this, he specifically means the clear trends towards more light and therefore towards large glass surfaces and floor-to-ceiling windows, slimline profiles, integrated, invisible hardware, energy efficiency and sound insulation. The growing demand for accessible and convenient solutions as a result of demographic change is also underpinning the rise of the modern Sliding generation. Its appeal is also due to intuitive operation. With “Patio Alversa” and “Patio Inowa”, “a great deal of effort” went into adapting the operating logic to the familiar sequences learned from Tilt&Turn windows. The common call for “Alexa” remains: more and more people appreciate the help they get from voice assistants in their day-to-day life. With the increasing networking in homes and apartments, sliding windows could soon respond to commands, couldn’t they? Busse in no way rejects this possibility, but doesn’t see it as an end in itself: “Tomorrow, the element has to be able to do what it already can do today. In this regard, fast and reliable electronic control is an additional criterion that should also be as price-neutral as possible.” Is that trying to square the circle? The future of windows will make this clear. The hardware expert asks the fans of “Alexa” to be patient a while longer.