Piqeur to be appointed managing director of Deventer 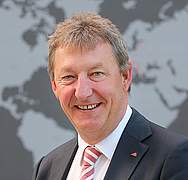 Mike Piqeur will take on the role of managing director at Deventer on 1st July 2020. The sales professional previously managed the Western Europe business area at Roto including the countries and regions of the United Kingdom, Ireland, Scandinavia and the Benelux Union. As a result, alongside extensive market, industry and company experience, he will in particular bring proven customer expertise to the table.

Leinfelden-Echterdingen - (rp) Sealing profile specialist Deventer is undergoing a change in its senior management team. As Roto Frank Fenster- und Türtechnologie GmbH (FTT) reports, Mike Piqeur will take on the role of managing director at the manufacturer on 1st July 2020. The current managing director, Lüder Pflügner, who has enjoyed great success in his over 13 years in this position, is reported to be retiring.

As a member of the FTT division, the Deventer Group has further production sites in the Netherlands, Poland and Russia alongside the headquarters in Germany (Berlin-Spandau). The supplier of gaskets made from thermoplastic elastomers (TPE), specific PVC formulations and silicone rubber currently employs around 200 members of staff. They are part of the “system with added value” from Roto, which is “high-performance and sets the company apart from its competitors”. This is reflected in the interaction between the hardware and gasket and therefore ensures the lasting benefit of expertise for customers.

The new Deventer director has a reputation as a market, industry and Roto expert “par excellence”. Piqeur, born in Amsterdam, joined the construction supplier in Leinfelden-Echterdingen back in 1985 as an export product manager. Various other positions followed, then at the end of 2000 he began his current role as managing director of the Western Europe business area including the countries and regions of the United Kingdom, Ireland, Scandinavia and the Benelux Union. But, according to statements, it was not only in this position that he acquired varied sales and project experience focused on his changing tasks. The fact that he has in-depth knowledge about the specific advantages and major market opportunities offered by the integrated system of “hardware and gasket” thanks to his long-standing collaboration with Deventer in the Netherlands, among his other experience, makes his future role “even more interesting” for him.

Piqeur therefore considers a “sustained and effective campaign of system expertise” to be a crucial aspect of his work. This will play a tangible part in implementing growth plans. Systematically increasing the internationalisation of the sealing profile business is another aspect of this. Furthermore, the 58-year-old intends to focus his efforts on active positioning when it comes to “sustainability”. In all these endeavours, he will be able to rely on the expertise and support of the “experienced management teams” at Deventer.

He will report directly to Marcus Sander in his new role as managing director. The Chairman of the FTT Board of Directors is looking forward to continued collaboration: “Alongside extensive market, industry, company and product experience, Mike Piqeur will also bring proven customer expertise to the table. He is highly qualified for this special role as he knows Roto inside out and has supported the company from an early stage.”