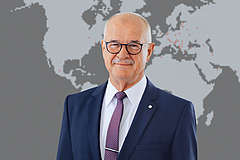 Satisfied with 2020: according to Dr Eckhard Keill, despite the “global disruption caused by the coronavirus”, the internationally active Roto Group has performed well, increasing both sales and income and ultimately achieving all its goals. The construction supplier wants to continue implementing “ambitious plans” in 2021, as the Roto Frank Holding AG board of directors announced during the 15th International Trade Press Day..

Leinfelden-Echterdingen – (rp) The forecast issued a year ago, which predicted that there would be a global economic slump in 2020, seems to have hit the target. Dr Eckhard Keill made reference to this at the 15th International Roto Trade Press Day, while emphasising that he “would happily have been wrong”. The primary cause of this predominantly negative development is the pandemic,which the Roto Frank Holding AG board of directors believes is currently “in resurgence” and which increases the risk of damage due to other issues. During the “global disruption caused by the coronavirus“, the internationally active construction supplier has performed well, increasing both sales and income and ultimately achieving all its goals. The Group hopes to achieve “ambitious aims” in 2021 as well.

In his statement, Keill initially discussed a few points that had previously not played a major role in public discussions on the subject of “The coronavirus and the economy”. He discussed how “sobering” it seems that more or less substantial free trade limitations caused by continuing sanctions (USA / China, EU / Russia, etc.) seem to still be functioning. In this field, at least, he said, politics is lacking in “reasoning and learning abilities”. The frequent disregard for market economic principles could, in the age of COVID-19, prove fatal.

The Holding board of directors once again expressed their criticism of the quality of many economic research institutes. They have found themselves in “permanent correction mode” again, thereby solely contributing to uncertainty. While forecasts immediately after the pandemic broke out seemed to predict “the end of the world”, this no longer seems to be the case. Instead, current prognoses now seem to say that “things won’t be so bad after all”. Rapidly changing “expert votes” were of little or no help as a well-founded guide to corporate strategies and decisions, in any case. Keill also has a sceptical view of the frequently voiced opinion that the world of work will fundamentally change as a result of the coronavirus: “I don’t see a revolution coming – it will be a process of evolution at most.”

The window industry has been affected by a specific consequence of COVID-19. The media and people around the world are becoming aware of the importance of the German culture of opening windows and ensuring ventilation. As a result, the well-known British newspaper The Guardian recently discussed this topic in detail in an article entitled “German windows”. An American also showed her enthusiasm in a video lasting over five minutes: “The concept of Fenster kippen was completely unknown to me.” This new attention could mean that windows become more important in the post-coronavirus world.

The economic turbulence caused by the pandemic has, of course, not left the markets and regions relevant for Roto untouched. On balance, it has led to these demonstrating very heterogeneous development. With this in mind, a tangible slowdown in our own business would have been no surprise. However, a glance at developments at group level as of 30th September 2020 shows the opposite. On this date, total sales amounted to €511.8 million (after €509.4 million) – an amount even higher than the corresponding figure from the previous year. This is reflective of the specific development of the three divisions. While Window and Door Technology (FTT) was lower than the comparable level reached in 2019, Roof and Solar Technology (DST) recorded significant growth. Professional Service (RPS), which specialises in comprehensive follow-up services for windows and doors, recorded double-digit positive results.

The estimate that the fourth quarter of the year, as in previous years, will not result in any significant differences is of course a “coronavirus caveat”. If things remain relatively stable on this front, Keill anticipates group turnover of a little over €675 million “+X” in total (after €668 million) in 2020. There is, therefore, a chance of nominal growth of almost 2%.

The ratio between foreign and domestic business remains at around two-thirds to one-third within the Group. There has also been a slight downward trend in the number of employees, which is currently around 4800 worldwide. The investment program that was continued in a targeted manner in 2020 is carrying on “at a level suited to the situation”, focusing primarily on replacement procurement and digitalisation.

Keill reported a “positive trend” when it comes to income, as well. The Group’s results have noticeably improved thanks to efficient resource and cost management, among other factors. The Holding board of directors also highlighted the income relevance of the company’s supply capability, which remained unrestricted despite the coronavirus and secured a specific competitive edge. The equity ratio, which was high in any case, continued to go from strength to strength; this emphasises the economic stability that is an important security factor for market partners.

The separation into a holding company and three divisions, which was completed in 2019, “has proven to be successful”, Keill reported. We have already been able to tick off the goals associated with this step. We have succeeded in reducing complexity, creating more transparency and accelerating processes. Moreover, in practice Roto continues to follow the motto: “Adapting to constant change means improving on a daily basis.”

As a clear commitment to the company, Keill emphasised how much he values future direct cooperation with owner families in the supervisory bodies of individual companies. As reported, a total of four family members are represented in the respective Holding, FTT and DST bodies. This is an important identification signal.

The separation of the Roto Group in the “extreme year characterised by the coronavirus” has left Keill satisfied: “We have been able to implement everything that we had planned.” Specifically, the company succeeded in escaping the general negative trend on a number of occasions, achieving positive growth within the company as well as anticipated sales growth, and improving profitability. This will enable the business to get 2021, “which will presumably be just as difficult”, off to a good start from a stronger position.

During the first Trade Press Day to be held digitally, Keill described two scenarios in his general forecast. His positive scenario involves the COVID-19 situation easing up in the long term, allowing markets to recover sooner than expected around the world. It also foresees increased restoration work. In his negative scenario, a second global lockdown leads to economic collapse, with the result that markets head into a second nosedive, followed by new financial and currency crises. Since neither possibility can be ruled out at the moment, there is no basis for a reliable forecast.

Ultimately, however the situation develops, Roto will adapt to the resulting situation as flexibly as before; however, the company will not deviate from its adopted course and implement its proven customer benefit strategy. As a result, the company must continue to place its trust in the unique strengths and the effectiveness of rapid, streamlined and efficient processes in all three divisions.

The approximately 70 journalists from 14 countries who joined the meeting digitally also learned what the Roto Group’s specific aims for 2021 are. The “four-point plan”: perform better than the markets again, achieve the title of “Best Performer” when it comes to fulfilling customers’ needs, achieve positive results in terms of sales again, and consolidate the profitability we have attained. Here is what Keill had to say on the subject: “We enjoy setting ourselves ambitious goals.”