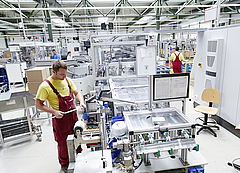 Leinfelden-Echterdingen – (rp) Despite the, on balance, strong market- and currency-related headwinds, the Roto Group remains on track in 2016 as well. This is ultimately also reflected in the around 620 million euros forecast total sales, which is just below the level reported the previous year. For 2017, for the first time in years, the construction supplier does not expect any further market stresses below the line, rather an “overall” stabilisation. Internal development is expected to be noticeably better with 4 to 5% sales growth. These were the key messages the chairman used to describe the company’s status and prospects.

Trump and other uncertainties

However, Dr. Eckhard Keill views recent events in world politics and their effects on the economy with some concern. According to the Chairman of Roto, Donald Trump’s election as the next President of the USA, “does nothing to make what was already a complicated situation any easier”. On the contrary, it leads to even greater uncertainty. What the election slogans “America first” and “Voting out the Establishment” will mean in practice is at present almost impossible to forecast. Although Keill considers a short-term economic upsurge in the USA to be a distinct possibility, he thinks the associated risks involved are obvious, and would ultimately be detrimental to the world economy. These risks include protectionism, inflation and government debt.

But otherwise, politics is also not remotely addressing what the economy needs most: predictability and reliability. The spectrum of imminent and potential trouble spots ranges from Syria, Ukraine and Turkey to the uncertainties surrounding the scheduled referendums, for instance, in France, Germany and the Netherlands in 2017. To those can be added the unsolved problems at EU level. This scenario provides no basis for substantiated forecasts or for considering “a company to be able to continue working undisturbed”.

In the words of the Roto Board of Directors chairman, in 2016, the window and door markets were in “an essentially unchanged situation” compared to 2015. Significant declines predominated in the inconsistent overall trend. The “continued slump” in Russia is particularly painful. Here, the market has practically halved in “just 20 months”. The “free fall” is primarily based on the political crises, the economic sanctions as well as the low oil price.

But, negative development is also being recorded in other relevant Roto markets. According to Keill, China posted sharp losses, especially in the 3rd quarter. In addition, Brazil’s significant market losses continued. In Western Europe, it is primarily the Benelux countries and Great Britain that are affected by this. Southern and Eastern Europe are among the growth regions, headed by North America. Europe’s current moderate increase in volume cannot disguise the fact that, from 2007 to date, the total window market has shrunk by a quarter to 70 million units.

For Germany, Keill once again referred to the “official associations’ overly optimistic figures”. Also of importance are general, but previously scarcely discussed sector problems. For example, the continuing consolidation process is leading to falling company numbers. According to a study, 6,400 window and door producers remain in the market, after 6,700 existed in 2011. Despite this, significant overcapacities exist, which, for instance, according to the study amount to about 5 million window units per year.

Stresses defied – invested in the future

On September 30th 2016, Chief Financial Officer Michael Stangier quantified the Roto Group‘s total turnover at well over EUR 480 million. In comparison with the previous year this corresponds to a “razor thin” rise thanks to two acquisitions. But, even the slightly negative adjusted sales revenue resulting from this effect can be classified as a “relative success” with regard to some spectacular market weaknesses.

Stangier is not expecting any “fundamental changes” in the 4th quarter. For 2016 as a whole, he is therefore forecasting around EUR 620 million in group sales, which is just below the previous year’s recorded sales level (EUR 622 million). The international to domestic sales ratio will once again level out at two-thirds to one-third. At the end of September 2016, according to their figures, the group has just under 4,500 employees, including the Deventer integration, which took effect from 1 January. Current year capital investments were once again in a “clearly double-digit million range” and were also used for tools required for both divisions’ new products. This confirms the construction supplier’s “ongoing innovative strength”.

Roto is “extremely pleased” with the new group members Peder Nielsen (Denmark) and Deventer (Germany, Poland, Russia, Netherlands). Their integration into the Roto network is proceeding according to plan. The “positive customer feedback” also confirms the company’s system strategy. This currently primarily applies for hardware and gasket interlocking. Further acquisitions are also planned for 2017. Financing is again taking place without additional borrowed funds and “once more” underlines Roto’s economic stability.

Yet, the 2016 earnings situation is “clearly unsatisfactory”. Stangier identifies the main reasons as the significant market-related stresses in the Window and Door Division, the significantly, up to 40% higher raw material prices (zinc, aluminium) and on balance, negative currency shifts. These will force the company to adjust prices in the short-term.

Roto’s response to the earnings pressure is “both resolute and differentiated”. The “firm” cost-saving programme absolutely does not contradict the continued intensive work on customers’ key purchasing criteria. This includes, as at 1 July 2016, a new process organisation, which is reflected in an even more efficient customer orientation. The willingness and ability to invest in the future also remained unaffected. The foundation of the new subsidiary in Chile also reflects the commitment to as well as the confidence in medium- and long-term market opportunities.

Not satisfied with stabilisation

This is because, for the first time in years, Roto is, on balance, not expecting any further market stresses in 2017. However, their development will remain patchy. Russia is expected to move sideways. The market depends heavily on the political development. The hope is therefore for de-escalation. An oil price rise is positive and therefore desirable for the economic and currency trend.

China is expected to remain at its current level for the time being. Government housing construction support programmes could make a clear contribution to this situation. Latin America, including Brazil, is expected to have reached their nadir, with 2017 being a “year of consolidation”. The North American forecast: continued upturn, albeit at a faster pace.

In Europe, Keill essentially expects a moderate rising trend. This specifically also applies for Germany, France, Italy, Spain and Poland. The losers include Great Britain – and “probably significantly”. All in all, the window and door markets are expected to stabilise in 2017.

However, this does not satisfy the Roto Board of Directors chairman. Instead, he is estimating group sales growth between 4 and 5%. In this, he is assuming stronger Roof and Solar Technology Division momentum. As a consequence, this means outperforming markets and competitors. Improving the earnings situation is “naturally also a priority”.