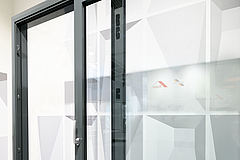 Leinfelden-Echterdingen − If security is a main priority for you, you’ll have to make compromises on the appearance. This belief is still widely held in the context of sliding systems as well. According to the manufacturer, use of the “Roto Patio Inowa” hardware product range proves that the opposite is true. Many PVC, aluminium and timber solutions from renowned (profile) suppliers, such as Aluplast, Gealan and Schüco, have since been equipped and tested with custom configurations of this “smart” hardware. The window and door technology specialist reports that other joint developments with other producers are in the pipeline.

The standard components include the V locking cam from the “Roto NX / AL” Tilt&Turn product range. While it counteracts jemmying of the sash, the lockable handle with 100 Nm torsional resistance ensures that the hardware cannot be moved or unlocked from the outside. The drilling protection, which is invisible from the front and is installed in the groove, prevents the espagnolette from being drilled out.

As Roto explains, the security strikers with built-in hardened steel plates, which have been exclusively designed for the “Patio Inowa” mullion, alongside the locking cams each form an active locking point in the mullion. A two-part anti-pushback function additionally ensures burglary inhibition in accordance with RC 2. By being installed vertically in the top and bottom of the mullion section, it ultimately protects the elements against being moved to the side and jemmied.

Multiple passed RC 2 tests in accordance with DIN EN 1627 are testament to the efficiency of the hardware. In addition, customers in Belgium, the Netherlands and Luxembourg are also able to produce burglar inhibiting sliding ranges using this system. It has the SKG** certificates required to prove compliance with the safety standards that apply in the region.

There is no shortage of convincing reasons to choose this product range when it comes to the appearance either. This is firstly demonstrated by the possibility of fitting the strikers for the mullion and the anti-pushback function with coloured cover caps. Secondly, “Patio Inowa” is set apart because no frame components protrude into the opening at threshold level. Thirdly, the delicate yet resilient components are ideal for creating sleek profile views.