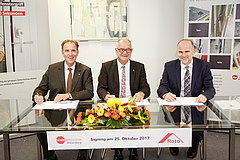 Striving to secure nothing less than Roto’s status as a leading service provider in the long term with a “completely new concept”: chairman of the board of directors Dr Eckhard Keill (centre) and chief financial officer Michael Stangier (left). The aim is firstly to significantly improve after-sales quality for hardware customers and secondly to pave an “innovative way” for resupplying windows and doors which have already been installed. First concrete result of the strategy: the acquisition of Wollenberg GmbH, founded by Ulrich Wollenberg (right) and based in Berlin, which came into effect when the contract was signed.

Leinfelden-Echterdingen – (rp) As a future-oriented step towards securing its “status as a leading service provider in the long term”, Roto Frank AG is reporting its second company acquisition this year. After acquiring Chinese hardware supplier Union Ltd. – a step which is especially relevant to international business – the current purchase is primarily geared towards the German domestic market at first. As the producer of window and door technology reports, Wollenberg GmbH, based in Berlin, will enter into its possession as of 1st November 2017. The company, with just under 40 employees, offers services for subsequently improving windows and doors.

This involvement is the first concrete result of a “completely new service concept,” underlines Dr Eckhard Keill. According to statements by the chairman of the board of directors at Roto, this involvement is firstly intended to significantly improve and expand the “after-sales services which are difficult to integrate” into the existing Group structure for window and door manufacturers. Secondly, it paves an “innovative and as yet unique way” for resupplying elements which have already been installed with gaskets and hardware. Ultimately, this is how to take account of the shared industry responsibility for satisfied end customers. The next few years will depend on firmly establishing this “forward strategy” in collaboration with window and door manufacturers and continuously developing it jointly.

The reorientation of the service division which is now being commenced by this acquisition will affect Roto functions such as the spare parts service. According to Keill, the term “resupply” refers to both the traditional spare parts and repair business as well as to upgrading elements at a later point. It is already becoming more important with regard to the increasing necessity to make windows and doors “Ready for Smart Home”. Each local situation determines whether the corresponding structures in the sister division of roofing and solar technology will also be incorporated here.

The purchase of the Berlin company is due to its extensive experience with retrofitting projects and many years of collaboration, explains Michael Stangier. The chief financial officer additionally indicates that company founder Ulrich Wollenberg has sound knowledge, for example as the former Roto regional sales manager in east Germany. He will remain “on board” as the managing director, including after the transaction completed as part of a timely succession plan. The personal and technical knowledge ensured by this guarantees continuity and expertise in equal measure.