Roto is getting stronger 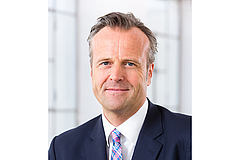 Caption: Marcus Sander will be taking on the role of Chairman of the Board of Directors at Roto Frank Fenster- und Türtechnologie GmbH. The 51-year-old business graduate’s last position was President & Chief Executive Officer (CEO) for the entire VAG Group. He brings comprehensive management experience and the required international expertise to his new role.

Leinfelden-Echterdingen - (rp) The Roto Group reports concrete steps in the implementation of the new structure announced at the end of 2018. In this way, according to Chief Executive Officer Dr Eckhard Keill, the wholly family owned construction supplier is setting the course for continued growth. The resulting separation into a non-operative holding company and three independent divisions will be complete by 1st May 2019.

As was announced, the Group has also managed to recruit an external candidate for the role of Chairperson of the Board of Directors at Roto Frank Fenster- und Türtechnologie GmbH. With Marcus Sander, an expert who has already enjoyed success in many management positions, is taking on this key role. He possess comprehensive management experience and also brings the required international expertise to this challenging role.

Sander’s last role was President & Chief Executive Officer (CEO) for the VAG Group. The producer, which ranks among the world’s leading suppliers of valves and hydrants for the water industry, is active on a global scale, just like Roto. The 51-year-old business graduate began his international career in 1995 at the Japanese corporation Mitsui & Co. This was followed by many years of experience in management positions at globally operating companies in the investment goods industry.

As a result, the new Head of Window and Door Technology (FTT) “exactly” meets the requirements profile, underlines Keill. He is retiring as Head of Division, a role which he currently shares, and will be concentrating on his work as Sole Chairman of Roto Frank Holding AG as planned. Regardless of his new position, he will, of course, support Sander upon joining the company. This seamless transition also upholds the principle of continuity, which is equally relevant to customers, staff and suppliers. This is additionally ensured by Michael Stangier. The former Chief Financial Officer of Roto Frank AG is bringing his extensive expertise to the position of Commercial FTT Managing Director.

Sander, who is married and has a daughter, is looking forward to taking on a “really exciting challenge” at the construction supplier. He knows Roto as a “strong and prestigious B2B brand with a clear strategy”. He is particularly impressed by the brand’s systematic focus on customer benefits: “I can fully identify with this. This is why my aim is to actively impact this strategy and make it even more successful.”