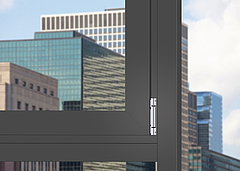 Leinfelden-Echterdingen – For many years, the “Roto AL” hardware system has been many manufacturers’ “first choice” for aluminium windows and balcony doors up to 130 kg. Further developments to the surface-mounted hinge sides have made the system even more reliable to work with, and it can now be used for sashes with weights of 160, 200 and 300 kg. Switching the screw drives over to hexalobular socket screwdrivers and a universal, plug-in corner drive quantifiably facilitate and accelerate window production. The “Roto AL” hardware system is now being extended with the addition of optimally coordinated, preassembled connecting rods and positioning jigs. Another new feature in the “Roto AL” system is the “sash stay 640” with a tilt distance of 190 mm for Tilt&Turn windows up to 200 kg.

With the launch of the further developed surface-mounted hinge side for “heavy weight classes” and the new “Roto AL” central locking system for the Euro-groove profile system, the cost and time involved in production is reduced for metal constructors and window manufacturers, while their offer is extended at the same time. “Roto AL” enables various standard and security windows to be produced while using a large number of identical parts. The system can also be used to manufacture even extremely large or tall Tilt&Turn windows up to 200 kg and very tall Turn-Only windows up to 300 kg. As a result, the “Roto AL” hinge side weighing 200 kg or 300 kg can create sash heights of up to 3000 mm as standard.

Faster installation with ease
The screw drives for the new surface-mounted hinge side for heavy-duty hardware have been switched over to hexalobular socket screwdriver 25, while those for the associated central locking system now use hexalobular socket screwdriver 10 for all clampable frame components and piercing screws. This achieves the required torques both reliably and effortlessly. Installation is more reliable, takes less time and requires less effort. As a result, window manufacturers benefit from lower production costs and consistently high-quality workmanship.

The “Roto AL” plug-in corner drive, which can be used universally for all standard and security windows up to RC 3, is another feature which simplifies production. It is secured without the need for tools using an insertable clamping fork. At the same time, striker “A” is no longer required. These changes also speed up processing and result in a further quantifiable reduction in production costs.