At home in Styria 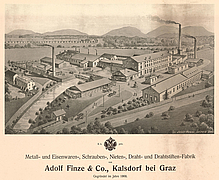 Kalsdorf – (rp) “It doesn’t take long for it to become apparent at the Kalsdorf site how efficiently tradition can be combined with progress.” At the end of September 2018, this is how Alois Lechner linked the long and eventful history of Roto’s Austrian site with its current significance for the globally active specialist in window and door technology. The Managing Director of Roto Frank Austria GmbH had a special reason for making this statement: the high-quality products from Styria have been used in various practical applications for 150 years. Around 700 guests from the worlds of politics, administration, civil society and the economy accepted the host’s invitation to the anniversary celebrations. These guests included State Governor Hermann Schützenhöfer, Member of State Government Anton Lang and Vice Mayor Manfred Komeritzky.

According to Lechner, there are “some really unusual conditions” at the company premises, which are steeped in history. For instance, the fact that a branch of the River Mur runs through the pocket of land, which covers 111,500 m² in total, is not exactly typical of a modern factory in the 21st century. The same applies to the building structure and layout, which have expanded over time.

When taking a look back at the company’s “eventful history”, Lechner highlighted some significant events. He considers the company’s “year of birth” to be 1868, when Adolf Finze founded a wire nail factory for producing screws and rivets in Knittelfeld, Austria. The company relocated to Kalsdorf in 1893. After the factory was even given its own connection to the k. k. Southern Railway in 1913, the company changed owners in 1918: the company was renamed Lapp Finze AG after Finze AG was purchased by Lapp AG, which was owned by brothers. In 1924, the company chronicle reported “700 members of staff, 50 clerks, 4 engineers and 1 director”, which was the highest number of people ever employed by the company. Eight years later, this dramatically fell to just 88 members of staff as a result of an extreme lack of orders.

Production could be restarted as early as 1943 after the machines were reassembled in Kalsdorf. The subsequent upturn in 1953 was reflected in the production of 10,000 tonnes of iron hardware. Exports already played a significant role back then, with 25% of output being exported to 26 different countries. 1968 and thus exactly to the 100th anniversary the company’s major regional importance was “officially” confirmed to a certain extent: the three nails in the official coat of arms of the municipality of Kalsdorf represent the “Lapp-Finze Eisenwarenfabriken AG” ironworks.

Specialities and willingness to invest

Lechner explained that Roto’s activities in Austria began in 1979 with the acquisition of 51% of the share capital by German company Wilhelm Frank GmbH from Leinfelden-Echterdingen near Stuttgart. Complete acquisition followed two years later. This heralded a phase of “constant investment in modernisation and expansion” which has continued to this day and extends to all production areas. Other important milestones include certification in accordance with ISO 9001:2000 (2002), transformation of Roto Frank Eisenwarenfabrik AG to Roto Frank Austria GmbH (2006) and implementation of the internationally valid Roto production system (2008).

As Lechner went on to highlight, premises approximately 28,700 m² in size currently house the company’s own facilities for tool manufacture, stamping, electroplating, powder coating, zinc die-cast, PVC injection moulding, pre-production and custom production for individual parts, assembly, warehouses for semi-finished products and finished goods and finally shipping, with most of these systems being automated. Thanks to this “end-to-end capacity” and efficient processes, it is possible to produce both small-scale and large-scale series depending on requirements.

As a result of the special local conditions, the site also has three of its own small hydroelectric power stations, which generate around 25% of the annual electricity required, amounting to approximately 12 million kWh. Roto considers itself to be in a good position, including where other matters relating to energy and the environment are concerned. Examples of this include total conversion to energy-efficient LED lighting, modern wastewater and exhaust air systems and a boiler house for supplying heat. Roto’s active participation in a current pilot project for conserving water, chemicals and energy in the electroplating processes also highlights the company’s willingness to consider “new ideas and approaches”.

Lechner simply describes the product range manufactured in Kalsdorf as “extensive”. He specifically mentioned hardware for Tilt&Turn / Turn-Only / Tilt-Only windows, mechanical and electronic multipoint locking systems for entrance doors, main door hinges for various application ranges, window shutter comfort hardware, electronic accessories for windows and doors, zinc and PVC components and punched parts. These are mainly supplied to other companies within the Roto Group. However, the company’s customer base also includes customers from other industries.

The Managing Director also states that around 10% of the company’s current 370 employees are trainees. This is testimony to the company’s solemn pledge to take its own steps to counteract the shortage of skilled labour that has become pronounced in Austria. The provision of training in seven different skilled trades is also an expression of the range of technologies used at the site. “Our systematic commitment to trainees is the logical consequence of our own high quality standards and those of our market partners,” Lechner emphasises in conclusion.

Chairman of the Board of Directors, Dr Eckhard Keill, passed on good wishes for the anniversary from the entire Roto Group, which achieved a turnover of just under €634 million in 2017 with its around 4900 members of staff. He described Kalsdorf and the people who work there as “extraordinarily important” for the international construction supplier. Styria is not only home to the development and competence centre for the “Fentro” and “Door” ranges but is also the location of the production site with the greatest vertical range of manufacture in the Roto Group’s worldwide network of factories.

This is why the company has enhanced and expanded the site in the past, and will continue to do so in future. The new powder coating system, achieved thanks to an investment volume of almost €2.5 million, is a characteristic example of this approach. It was commissioned in 2018, “just in time for the anniversary”. “Roto feels at home and in good hands in Kalsdorf,” summarised Keill.

At the same time, he used this opportunity to express his appreciation for Alois Lechner, who will be retiring at the end of the year after 45 years of working at the company. He started work in the factory in July 1973 as a young man aged 20 and earned his stripes in the Accounting department at first. He continuously took on more tasks and greater responsibility until finally becoming Managing Director in 2006. Keill thanked Lechner for his “memorable achievements” and described him as “a pillar of strength for the Kalsdorf site”.