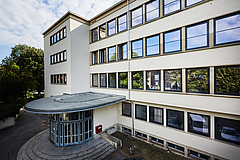 Leinfelden-Echterdingen / Saarbrücken – In spring 2017, the Saarbrücken Regional Association announced a broad investment programme for the schools in its area of responsibility. In many properties, insufficient thermal insulation, leaks in the building envelope and cold bridges were resulting in high operating costs. Dampness was “gnawing away” at the structure. The recipients of investments under this programme included the social care education centre (SBBZ) at the Schmoller School in Saarbrücken, with Metakon-Metallbau GmbH producing more than 300 windows for this school and equipping them with a hardware solution from Roto. The particular challenge was that the building was listed.

Lothar Behles, project manager at Metakon, can still clearly remember the condition of the old steel windows in the Schmoller School: “The windows were leaking at many places while numerous sashes and frames displayed visible corrosion damage. Moreover, the single-glazed windows hardly provided any thermal insulation.” The new window sashes for the Schmoller School constructed in the 1970s were to feature double glazing. With a sash height of more than two metres, this meant that high weights were to be expected.

In the planning phase, meetings frequently took place with the Lehners und Barbian architecture firm tasked with renovating the building and the parties responsible for protecting listed buildings. “Every window type developed for the Schmoller School was assessed to determine whether it was suitable for use in a listed building. Only then was official approval granted for production and installation,” recalls Behles. “The impact of the specifications is now evident, for example, from the extremely delicate profiles.”

The window draft designs were implemented using the Hueck Lambda WS 075 profile system with bevelled outer contours and hardware from the “Roto AL” Tilt&Turn hardware system as well as a Roto turn restrictor. Although this was originally designed for outward opening windows, the turn restrictor has already proven itself time and again to be a robust solution for public and commercial buildings when used in combination with Roto Tilt&Turn hardware for aluminium windows, explains Matthias Nagat, Head of Roto Aluvision Range Marketing and Product Adaptation. “The Roto Object Business tests various hardware configurations for customers' specific properties and then also guarantees that they will be suitable for use. This way, durable and safe Tilt&Turn windows were produced in collaboration with Metakon.”

Lothar Behles recalls another detail of the workmanship which Metakon had a good experience with during renovation work: “As is the case in many renovation projects, the design consisting of normal window frame and sashes was supplemented by an additional four-sided aluminium angled panel, which we used to design the create to the existing brickwork on the inside and outside.”

Turn-Only and Tilt&Turn windows with frame dimensions up to 1680 mm wide, 2140 mm high and sash weights up to 91 kg were produced and installed. “The requirements for the hardware and opening restrictors were written out in great technical detail by the architects,” explains Behles. “The decision to choose ‘Roto AL’ was an obvious one for this reason, and also because we wanted to use an extremely reliable and low-maintenance system. We appreciate the high functional and material quality of this system and are on the safe side with all elements without exception because this hardware is capable of bearing sash weights up to 130 kg.”

High-quality windows for reliable functionality in the long term

Around 50 of the windows produced for the Schmoller School were fitted with an opening restrictor from the “Roto FS Kempton” outward opening product range. It limits the opening width of the sashes to 263 mm at most, thereby ensuring that, when open, they only project into the room as far as the end of the window sill. “What mattered here was, firstly, protecting particularly at-risk reveals and, secondly, ensuring the safety of pupils and teachers in individual classrooms,” explains Behles. Particularly around movement areas, the sashes should not project into the room because this would cause a certain risk of injury. Authorised personnel can, however, unhinge the turn restrictors on the frame bearing using a special key, therefore achieving a larger opening width. When the turn restrictors are then locked in the frame bearing again, the window can be opened up to 263 mm in everyday use. Behles is sure that: “The high-quality windows and hardware components installed in the Schmoller School will, in the future, certainly help extend renovation intervals for the building compared to the past.”