Trade Press Day 2019: Roto takes action and trusts in its own strengths 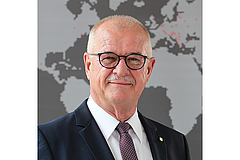 Roto takes action and trusts in its own strengths

Bad Mergentheim/Leinfelden-Echterdingen – (rp) “That was exactly what happened – only things were even worse than feared.” During the 14th International Roto Trade Press Day, with this key statement, Dr Eckhard Keill made reference to the assumption he made one year ago that in 2019 important markets would be “influenced by external factors.” In mid-November in Bad Mergentheim (Germany), the sole director of Roto Frank Holding AG noted that the global deluge of politically induced crisis points is increasingly bringing the economy to its knees. According to him, relevant window and door markets are suffering under this “heavy burden.” Despite this, the construction supplier “performed well” overall in the first year of its new structure, achieving the slight turnover increase that was predicted. This should continue into 2020, although the likelihood of a global economic downturn is high. The situation at international level is not expected to improve until 2021.

In his statement, Keill emphatically highlighted the risks and negative effects of general conditions “that cannot be influenced by any company.” Using a whole host of examples, he clearly illustrated the extent to which “the economy is in the stranglehold of politics” at present. He specifically mentioned the trade disputes between the USA and China, and the USA and the EU, the “Brexit chaos with as yet unknown outcome”, and the Syria / Turkey, Hong Kong / China, Iran / USA and Russia / Ukraine crisis points. This is further compounded by the consequences of climate change, which are also associated with a “high potential for conflict.” Protectionism, populism and resentment within society are the direct or indirect consequences of crises.

Keill judged the “seemingly unending spiral of sanctions” to be the main problem. Policymakers do not acknowledge or do not want to acknowledge that sanctions – for example those enforced on tariffs – in no way only affect the country against which they are imposed, but also inevitably have a tangible impact on virtually all industries and companies in a globalised world. To put it plainly, this means: “sanctions cost growth, jobs and income.” If there is something positive to take from this development, it would perhaps be the hope that “the serious political mistakes have since been made.” The Director of the Roto Group put forward his brave prediction for the United Kingdom that after the new elections in December, a second referendum on Brexit would be held and the country would not leave the EU after all. In the United Kingdom itself, the negative consequences of Brexit have meanwhile already “taken hold.” In reference to the USA, Keill expressed his opinion that Donald Trump will or has to end or at least defuse the initiated trade disputes in the “relatively near future”, especially with a view to the presidential elections on 3rd November 2020.

Aiming for a slight turnover increase

In 2019, the considerable political tensions also left their mark on the markets and regions that are relevant to Roto and in this regard somewhat hampered the company’s business activities. Nevertheless, an overall turnover of €509.4 million was recorded by 30th September, which is equal to an almost 1% increase (after €505.6 million). This is reflective of the specific development of the three divisions. While Window and Door Technology (FTT) was at the level of the previous year, Roof and Solar Technology (DST) recorded moderate growth. Professional Service (RPS), the company’s newest division, recorded an increase “as planned.”

Since no general changes are predicted for the fourth quarter, it is likely that the previous development will continue until the end of the year. Keill is therefore expecting “to have to still carve out” the 1% turnover increase but to ultimately achieve it. A group turnover of a little over €668 million in total (after €661.8 million) is therefore to be expected for 2019. Growth is far below the target rate of between 3% and 5%. This is mainly down to the market downturns in the FTT sector that are attributable to political factors.

The ratio between foreign and domestic business remains stable at group level at around two-thirds to one-third. The same essentially applies to the number of employees, which is around 4900 but showing a downward trend at present. The investment volume under the responsibility of each division in its area is returning to a high level in the period of 2019 / 2020. Digitalisation is a focal point here. Keill admitted to showing restraint when making individual investment decisions due to the political risks.

Well established in a new formation

With regard to the revenue situation, the construction supplier is still “far from satisfied” in its overall assessment. With “favourable circumstances” and “major efforts”, it is, however, possible to surpass the group results of the previous year. The one-off costs incurred during the implementation of the new structure must be taken into consideration as a special factor here.

The modified Roto Group has formed and become established as planned, added Keill. All committees (e.g. new Holding and FTT supervisory boards and new DST advisory board) are formed and the management positions in the companies have been completely filled. The sole director emphasised that “practical work is going well.” The second issue of the “Up to date” project newsletter provided staff with a status update at the start of November. The first joint “experience check” is planned for mid-2020. Moreover, Roto follows the example of Confucius in practice:
“Our greatest glory is not in never falling, but in rising every time we fall.”

The summary given to the international technical press was that in its start-up year, the new Roto Group was able to establish itself well overall. That is primarily thanks to the company’s own performance. Without the “stranglehold of politics”, FTT especially would have been able to achieve much more, summarised Keill.

In his general outlook, he formulated one positive prediction and one negative prediction. The good news: “some geopolitical crises will be overcome in 2020 due to better insight or under the pressure of circumstances.” This gives reason to be hopeful of an economic upturn in 2021,
which will then also improve the situation on the markets relevant to Roto.

The bad news: “in 2020, there will be a global economic downturn because of the many crisis points.” The latest warning from the International Monetary Found (IMF) reveals the scale of these crises by means of a single example. If the USA and China do not abolish their mutual punitive tariffs, global economic output will decrease by around $700 billion or 0.8% in 2020. And when the German Economic Institute (IW) describes the risks with the headline “Trade war: everyone loses in the end”, there’s really nothing more to add. Keill himself also unequivocally described the consequences with reference to this headline: “markets, companies, staff: everyone suffers in the end.”

Roto is, however, aiming to and will – if possible – buck the general negative trend. To do so, the construction supplier, with its three divisions, is trusting in its own strengths, its customer benefit strategy which sets the company apart and the effectiveness of fast, streamlined and efficient processes. This approach has already started to pay off. It is likely to be reflected in positive economic development within the company in 2020 too. The specific group objectives are lower single-digit turnover growth and improved profitability.

Keill foresees greater opportunities for the Roof Window division based on the assumption that the European markets that are significant to DST will be less affected by political currents and will therefore be able to achieve more stable development. It therefore possesses a relatively solid foundation for continuing its “favourable performance” from the last few years. The situation at RPS is unique, as its business activities are aimed at the service markets in Germany and Switzerland. The fact that they are shaped by truly continual demand boosts orders for follow-up care for windows and doors.