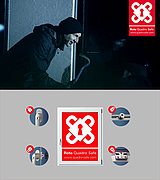 It's finally here: As announced at the start of September, our successful burglary protection campaign videos have now been published and released.

The Roto Quadro Safe video spot is the screen adaptation our spring 2015 radio commercial. It takes an entertaining look at two burglars miserably failing to get past the tough Roto Quadro Safe resistance components.of a terrace door.

We have made the video available to our fenestration industry partners and building element dealers for presentation in their window showrooms. This will allow the video material to support end customers during window purchasing consultations.

The Roto Quadro Safe videos will also be shown at our exhibition stand at the coming March 2016 fensterbau/frontale exhibition.

The Videos can be found on the following platforms in German language: