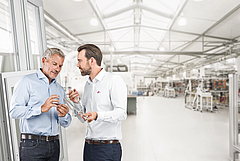 Kalsdorf/Graz/Leinfelden-Echterdingen – (rp) The new “Roto NX” Tilt&Turn hardware system is turning into a “bestseller” quicker than expected, not least thanks to the features and functions presented at the “Fensterbau Frontale” trade fair in spring. The enormous demand means “that we have to arrange for ramp-up in production to be much faster than expected.” Jens Busse explained this during the 13th International Trade Press Day held in mid-November 2018 in Kalsdorf, near Graz. However, the Director of Customers and Markets West stated that the global economic boom partly upset the “higher speed” plan due to extended machine delivery times. It became apparent that Roto had to initially focus on the PVC sector. In this case, Roto’s own changeover capacity aligned with the priorities of customers. The timber hinge side “T” will now be launched in autumn 2019.

Success thanks to a successful design of DNA

Needless to say, on the one hand, delays are far from ideal. On the other, they are also testimony to the great efficiency achieved by the marketing concept of “A focus on customer benefits”. Busse demonstrated this using “first movers” as an example. This target group usually modernises their production process quickly, but normally only in the premium segment first. But now many businesses are choosing a different approach and are fully converting their production facilities from the very outset because of the many advantages offered by the new hardware system.

The fact that “Roto NX still has NT in its DNA” also turned out to be an important factor in its success. Just like a Lego modular system, there is a functional connection between the components, which Roto made sure to retain. This way, manufacturers could equip Tilt&Turn windows with the additional properties and advantages without making any major investments or modifying their production process. “The simplified generation change in the hardware is proving popular in particular,” reported Busse. Last but not least, with the “TiltSafe” feature, Roto is offering the first real window solution with burglary inhibition in tilt mode. This “highlight” is eliminating a security vulnerability and closing a market gap, as users do not think that current night ventilation provides the desired air exchange “that they can feel”.

Under the motto of “We go one better”, the window and door technology specialist in Austria announced the extra contribution it is making towards providing customer benefits in the form of the attribute of “security”. As Hartmut Schmidt explained, the producer will be supplying its Tilt&Turn hardware system with a new surface from 2019 onwards. “Roto Sil Level 6” is based on an innovative coating technology with microcrystalline structure and, in addition to “Roto Sil”, is used as an advanced standard for connection components subject to high stress, such as rivets, bolts and sliding elements, stated the Director of Product Innovation. This makes Roto the first manufacturer in the world to ensure corrosion resistance that goes beyond the standard in critical areas. Although DIN EN 13126-8 defines requirement and test procedures for Tilt&Turn hardware, segments under especially high stress are not considered in the assessment.

Schmidt underlined the fact that the current salt spray test in accordance with DIN EN ISO 9227 class 5: 480 h does not actually represent the actual stress exerted on components that are exposed to the weather. It depends on the type of coating and the extent of corrosive stress caused by humidity and temperature stress and salt content, etc. However, these changes have not yet been applied, even when class 5 is awarded for extremely high resistance, a requirement that is met by “Roto NX” at any rate. By contrast, a climate change test developed in-house at Roto combines all relevant values: “From polar to tropical regions, it simulates all types of stress. This provides lasting, reliable protection for hardware components, even under extreme conditions.”